Everyone, it seems, has a “theory”

The other day I got an email from someone claiming to have solved all the outstanding problems in physics and cosmology. Having read a few popular science books, the author insisted that only his brilliant and original perspective could save science from itself. His new “theory” would revolutionize the world!

I’ve gotten a lot of messages like that over the years, and they always make me smile. Most scientists who are in the public eye have their own collections. I’ve even received full-fledged manuscripts and autographed, self-published books.

People’s “theories” about the universe are often anything but.

Of course, the problem with these “theories” is that they aren’t scientific theories at all. In science, a theory is not just a wild guess. To a scientist, a theory is an idea that is consistent with known facts and makes testable predictions about the world.

Quantum mechanics is a theory that a lot of people never really liked. It made Einstein apoplectic, and some physicists are still trying to strip it of what they see as its philosophically troubling aspects. But quantum mechanics is still around for a simple reason: Even the theory’s most bizarre and seemingly preposterous predictions have always turned out to be correct. The same can be said for theories like relativity, the Standard Model of particle physics, the Big Bang, and on down the line. 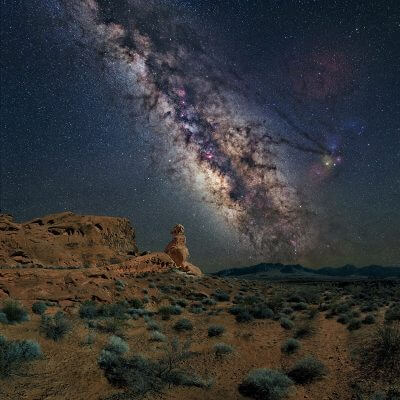 As you gaze into a starry sky, it’s easy to draw up your own ideas about how the universe works. But that doesn’t make them battle-tested by the scientific method.

There is more to it that what you see on TV.

“Theories” like the one that appeared in my email come nowhere near meeting that standard. For centuries, thousands and thousands of very clever people have spent their lives teasing precious facts out of nature, and building theories that make sense of those facts. Job No. 1 for a new theory is to do no harm; it must account for what is already known. In an established scientific field like cosmology, those facts involve elementary particles, star formation, stellar evolution, galactic structure, general relativity, and so on down a very long list. You just don’t get that watching documentaries on cable TV.

I don’t want to be harsh. If you are reading this column, you doubtless enjoy the fascinating glimpses of the universe that you find in a magazine like Astronomy. You don’t have to be an expert to appreciate that beauty. I feel much the same way about things like art and music. It’s fun to contemplate the waves you see on the surface of the ocean, even if you don’t fully grasp the depths that lie beneath.

But sometimes talking to someone with a “theory” is anything but fun. Those are the people who are true believers in their own speculations, and they often view scientists with contempt. “The audacity of those scientists! Who are they to pretend that their decades of post-secondary education and research mean anything!”

Sometimes people don’t know enough to realize just how wrong they are.

After all, those self-styled Leonardos are really smart. They are just amazingly smart. They are really just the best and smartest people around. They are so, so much smarter than scientists. And if there is something that they don’t know about or that doesn’t agree with them, well, it must be wrong and it can’t really be all that important, anyway.

Welcome to the Dunning-Kruger effect, named after two Cornell psychologists who gave a large group of people tests and then asked them how they thought they did. Kruger and Dunning were startled by what they found. Almost everyone who took the tests was sure they did much better than average. That was even true for the very worst performers, who wildly overestimated their scores. At the same time, the very best performers typically underestimated how they did.

What Kruger and Dunning found was that if people don’t have the skills needed to do well on a test, they don’t know enough to assess their own performance. People who know very little can truly believe themselves experts because they can’t tell the difference. Meanwhile, experts who fully understand just how difficult and subtle things can be think themselves less competent than they truly are.

British philosopher Bertrand Russell knew about the Dunning-Kruger effect long before it had a name. Quoting Russell: “The whole problem with the world is that fools and fanatics are always so certain of themselves, but wiser people so full of doubts.”

I started keeping a file labeled “Dunning-Kruger,” where I put things like the “theory” I received in the mail the other day. It joins articles on climate denial, intelligent design, and connections between vaccines and autism, to name a few.

I wonder sometimes just where the Dunning-Kruger effect might lead us. I hate to say it, but that folder is getting thicker and thicker by the day.

A Dunning-Kruger Universe ^ Everyone, it seems, has a “theory”  © Dr. Jeff Hester
Content may not be copied to other sites. All Rights Reserved.