When I look at NASA’s new Administrator, Jim Bridenstine, it is his fellow Oklahoman Scott Pruitt’s EPA that jumps to mind. As politically uncomfortable science is pushed aside, NASA’s history of nonpartisanship appears headed for an abrupt end. Will a strongly partisan NASA have a target on its back?

Since it’s inception, NASA has represented the better part of the spirit of America. From landing on the Moon, to rovers exploring the surface of Mars, to tethered astronauts at work against the backdrop of Earth, to images of the universe sent back from science missions like the Hubble Space Telescope, NASA’s accomplishments have been celebrated across the political spectrum and around the world.

Despite being born of the Cold War, NASA has also served as an olive branch. The 1975 handshake between US and Soviet crews during the Apollo-Soyuz mission marked a dramatic turn in diplomatic relations between the superpowers. Today, presence of American astronauts and Russian Cosmonauts aboard the International Space Station is a bridge between two nations whose relationship has seen happier times.

In everything that it does, NASA must face the unforgiving reality of challenges that overshadow politics. The laws of physics are neither Republican nor Democratic, a fact forgotten at one’s peril. Since the agency’s inception, NASA’s appropriately nonpartisan status has been reflected in the character and qualifications of its leadership. NASA Administrators have historically been dedicated scientists, engineers, astronauts, and civil servants who put the good of the agency and the nation first. The previous Administrator is a fine example of that tradition.

General Charles Frank Bolden graduated from the United States Naval Academy with an Electrical Science degree in 1968 and flew over 100 combat sorties during the Vietnam war. He went on to become a Navy test pilot, then entered the Astronaut core in 1981. He flew four Space Shuttle missions and served the agency in a host of capacities ranging from Astronaut Office Safety Officer to Assistant Deputy Administrator. Following his time in the Astronaut Corps Bolden returned to the Navy where he served in a number of combat and noncombat positions, ending his career as Commanding General of the 3rd Marine Aircraft Wing.

When nominated to the position of NASA Administrator by President Obama in 2009, Bolden had the proven judgment, knowledge and experience to lead a complex technical and scientific agency. Bolden’s nomination was unanimously supported in committee and easily approved by voice vote on the floor of the Senate.

President Trump’s appointment to the position of NASA Administrator, Jim Bridenstine, is a horse of a very different color. The closest that Bridenstine has come to running an organization was his time as director of the Tulsa Air and Space Museum and Planetarium. With degrees in Business and Economics, he lacks any formal technical or scientific background. Bridenstine’s flight experience is limited to service in the United States Naval Reserve and the Oklahoma Air National Guard. Bridenstine’s interest in space exploration seems authentic, but interest does not qualification make. 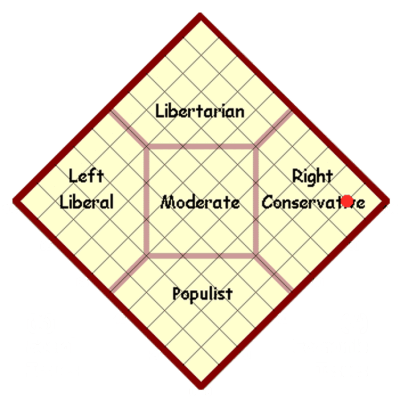 While in Congress, new NASA Administrator Jim Bridenstine, a Tea Party Republican, was known more than anything for the strength of his partisanship. The graphic above shows a political assessment of Bridenstine by the nonpartisan OnTheIssues.org. Of particular note, he is a climate change denier who has introduced legislation to strip “the utilization of space for peaceful and scientific purposes” from NASA’s charter. This is a radical shift from a history of far more qualified and less politically divisive Administrators.

Apart from a lack of relevant background or experience, what truly sets Bridenstine apart from his predecessors is that he is the first NASA Administrator to have been an elected politician. Bridenstine, a Tea Party Republican who represented Oklahoma’s District 1, is distinguished first and foremost by the strength of his partisanship.

OnTheIssues.org, a nonpartisan organization that analyzes political leaders on the basis of policy positions, places Bridenstine near the extreme Right Wing of the political landscape. Quite apart from his thoughts about NASA, Bridenstine cosponsored a constitutional amendment banning same-sex marriage and took the lead in trying to impeach President Obama’s first Attorney General, Eric Holder. In today’s political climate, it is little surprise that Bridenstine’s controversial nomination was approved 50-48 along strict Party lines.

Lots of space opera, but no expertise.

With no background in any scientific or technical fields, Bridenstine has been a champion of efforts to weaken NASA’s commitment to science. In 2017, Bridenstine sponsored the “American Space Renaissance Act” which called for NASA to “rid itself of extraneous responsibilities.” Among NASA objectives that the bill would eliminate are, “expansion of human knowledge of the Earth and of phenomenon in the atmosphere and space,” and “the utilization of aeronautical and space activities for peaceful and scientific purposes.” Perhaps Bridenstine read a little too much space opera as a kid.

A former astronaut, Senator Bill Nelson (D-FL) was quick to note the fundamental problem with Bridenstine’s nomination. “The head of NASA ought to be a space professional, not a politician.” Nelson’s assessment is that Bridenstine, “is not prepared to be the last in line to make that fateful decision on ‘go’ or ‘no go’ for launch.”

Those concerns were shared by some Republicans. Senator Marco Rubio (R-FL) remarked, “I just think it could be devastating for the space program… It’s the one federal mission which has largely been free of politics and it’s at a critical juncture in its history.” Even so, Rubio voted with his Party. Senator Jeff Flake (R-AZ) originally voted against Bridenstine, but changed his vote to put Bridenstine’s confirmation over the top.

Putting a fox in charge of the hen house.

Maybe it’s just me, but I see a strong resemblance between Bridenstine’s nomination and that of fellow Oklahoman Scott Pruitt’s nomination to head the Environmental Protection Agency.

NASA has been under political attack for some time because of its work on global warming and climate change. Politicians sometimes have trouble accepting that there are realities that they cannot change with the stroke of a pen. In 2015 Congressional Republicans sought to cripple that capability by cutting almost three quarters of a billion dollars from NASA’s Earth Science budget. 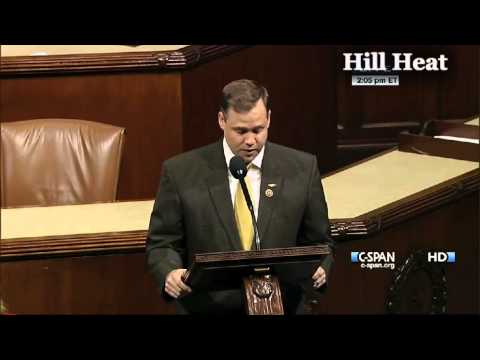 Jim Bridenstine, NASA’s new administrator, speaking on the House floor while serving as a Representative from Oklahoma. Bridenstine denies the science of global warming, cites a number of climate myths, demands an apology from President Obama for funding climate science, and promises to do something about it.

Now Bridenstine, who has long insisted that humans bear little or no responsibility for climate change and who was financed during his campaigns by large donations from the oil and gas industry, will lead an agency tasked with understanding that very problem. During his confirmation hearing Bridenstine backpedaled somewhat on previous positions in an effort to win votes, but still refused to acknowledge the strength of the scientific consensus that climate change is overwhelmingly due to human activity. Even Smithsonian’s Air & Space Magazine called Bridenstine’s performance during the confirmation hearing, “evasive to the point of dishonesty.”

Scott Pruitt made a career of fighting against environmental protections wherever he encountered them. Who better to get rid industry of all those pesky rules about clean air and clean water? Likewise, how better to get rid of all that inconvenient climate change stuff than to put a climate denier in charge of the agency responsible for much of that science? When Pruitt took over at the EPA, everyone knew what he was there to do. People have a pretty good idea of one reason why Bridenstine is going to NASA as well.

A partisan NASA sits in the crosshairs.

I am clearly letting my perspective as an astrophysicist with technical knowledge of climate science show through here. (It’s forever strange to live in a world where “knowing what you are talking about” is considered a source of bias.) And unlike some scientists I am also a fan of the Buck Rogers side of NASA’s house. I support manned space exploration, which Bridenstine clearly champions. But even were I to agreed with him on every policy and priority down the line, the simple fact of Bridenstine’s partisanship is extremely troubling. Like the EPA before it, a partisan NASA suddenly waves a battle flag that proclaims its allegiances.

I’ve been trying to wrap my head around the challenges that a strongly partisan NASA will face. I don’t claim to own a crystal ball, but in nominating Bridenstine Trump may have painted a target on the agency’s back. This November will bring the 2018 midterm elections. If prognosticators are correct — which is, of course, a very large “if” — it is likely that control of the House and perhaps the Senate will pass to the Democrats. With the U.S. budget deficit set to exceed $1 Trillion in the next two years, it is naive to think that a lot of programs won’t end up on the chopping block. In that environment NASA could find itself adrift in a sea of vulnerable Federal discretionary spending with few serious defenders, surrounded by sharks from both sides of the aisle.

Personally, I’m a space cadet from way back. I remember watching Mercury astronauts being bolted into their capsules. I cried when Apollo 17 left the Moon. I cheered as Shuttle Discovery carried Hubble into orbit. Watching NASA’s accomplishments set me on the course of my life. I was honored to spend most of my career as a scientist working in or around NASA in one capacity or another.

But right now I’m just as happy that my cart is no longer attached quite so directly to that particular horse.

EPA Rehash ^ A suddenly partisan NASA faces its future  © Dr. Jeff Hester
Content may not be copied to other sites. All Rights Reserved.