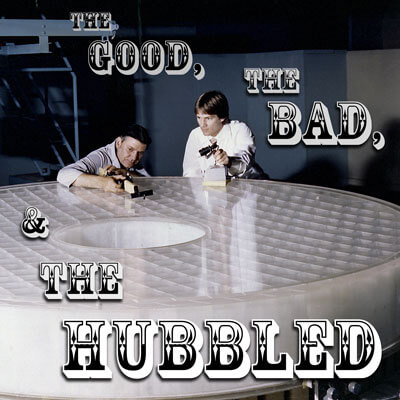 The Dangers of Wishful Thinking

An error in Hubble’s primary mirror had the mission on life support from the very beginning. There are technical answers to exactly what happened. But the real culprit was plain, everyday wishful thinking.

Before its launch the Hubble Space Telescope was being described as the greatest single advance in astronomy since Galileo first turned his small telescope on the heavens. That was not hyperbole.

From childhood we know the song, “Twinkle, twinkle little star, How I wonder what you are.” The “twinkle” in that lyric is a real thing. As light travels through Earth’s atmosphere it is bent this way and that by turbulent, ever-changing pockets of air. That blurs our vision. Hubble’s power doesn’t come from getting closer to celestial objects, as many imagine. Instead it comes from being above the atmosphere where celestial objects don’t twinkle and, as the song says, we can better know what they are.

We all knew that Hubble’s mirror was perfect…

The Hubble Space Telescope was meant to see roughly a hundred times more detail than typically possible from the ground. To live up to that promise, though, Hubble’s main mirror would have to be by far the finest large mirror ever made. As we watched the telescope ride into the sky atop a pillar of flame, tucked securely into the cargo bay of Space Shuttle Discovery, there were a host of concerns. Hubble is an extraordinarily complicated machine, and there were thousands of things that might go wrong. But as for the mirror, we had all seen the test results. The mirror, we felt certain, was flawless. 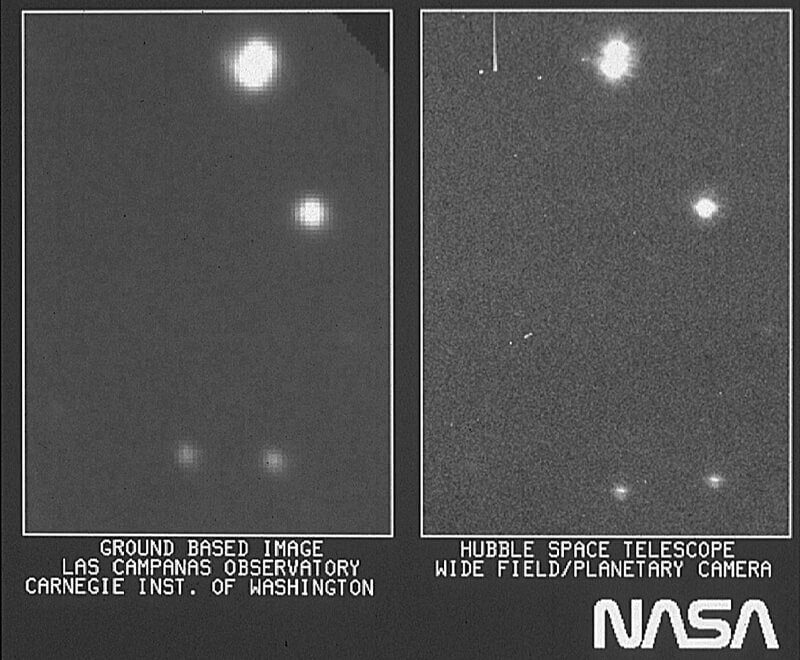 Hubble’s “First Light” press release did not show what we expected, nor what we wanted to see.

As a young member of the team I was proud to be the one sitting in front of a computer console about a month later when the very first image from Hubble was radioed to Earth. Right there on live nation-wide television I put together Hubble’s “first light” press release photo. That was the image that first told us that something was amiss.

Only later did we discover the source of the problem. To make good images the mirror had to be the right shape to within about a fifteenth of the wavelength of light. But after launch we discovered that Hubble’s mirror was too flat, and not just a little too flat. By the time you got to the edge of the mirror it was too flat by 120 times the allowed error!

Why didn’t we test it better? Actually, we did.

As the truth came out, the immediate cry was, “Why didn’t you test it better on the ground?” But the fact is that we had. PerkinElmer, the company that polished the mirror, had actually tested it in two different ways. What they didn’t bother to mention, though, is that those two tests had different results!

There is a game show that asks, “Are you smarter than a fifth grader?” Well, even a fifth grader knows that if you measure something twice and get different answers there is a problem. So how is it that a bunch of really smart people looked at two measurements telling them different things and didn’t raise red flags?

Hubble was a victim of wishful thinking.

Courtesy of a lot of wishful thinking, some of the finest optical engineers in the world convinced themselves that they knew that the mirror was perfect! They did such a good job of convincing themselves that they never bothered to tell anyone else about the two tests with different answers. They boxed up the mirror and shipped it to NASA. There were lots of other chances to discover the problem. The telescope went through review after review. But despite all of those reviews no one discovered that there were other test results that they had not been shown.

It was only when those first images were radioed back to Earth that the whole project muttered a collective, “Oh fudge!” Or something like that. On Wall Street they remember the Crash of ’29. In astronomy we remember the press conference where it was announced to the world that astronomy’s greatest triumph in almost four centuries might be nothing but a piece of orbiting junk.

If you need to be right, look for reasons that you might be wrong.

In Hubble’s case, the optical engineers were all but slapped in the face by evidence that there was a problem, but they chose not to see it. Wishful thinking cost NASA billions of dollars, years of work, destroyed careers and reputations, and almost denied us of the mind-bending discoveries that a repaired Hubble later went on to make.

Not every mistake winds up in the history books, but the kinds of mistakes Hubble’s engineers made happen all the time. If we want to avoid them, a place to start is by asking ourselves, “What wishful thinking am I counting on, and what could it cost me if I’m wrong?”

Good, Bad & Hubbled ^ The Dangers of Wishful Thinking  © Dr. Jeff Hester
Content may not be copied to other sites. All Rights Reserved.