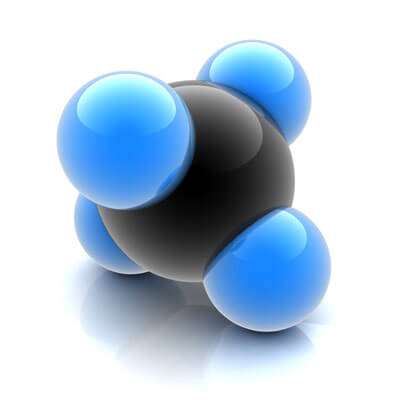 The Fun Physics of Aliso Canyon

The Aliso Canyon methane leak is a major disaster. It is also a showcase for some really fun physics! Including, among other things, the fun physics behind global warming.

The ongoing methane leak at the Aliso Canyon Gas Storage Field near Porter Ranch, California is without doubt a major economic, human and environmental disaster that points to the risk of similar events around the nation and the world. Google “Aliso Canyon” and read to your heart’s content.

There is a lot that I might say about Aliso Canyon. It really is a textbook example of the kinds of things that I talk about all of the time. Knowledge doesn’t come from looking for reasons to think that you are right. Knowledge comes from looking for indications that you are wrong. Investigating the roles of confirmation bias, groupthink, snake oil and wishful thinking in the lead-up and response to the Aliso Canyon leak is left as an exercise for the student. 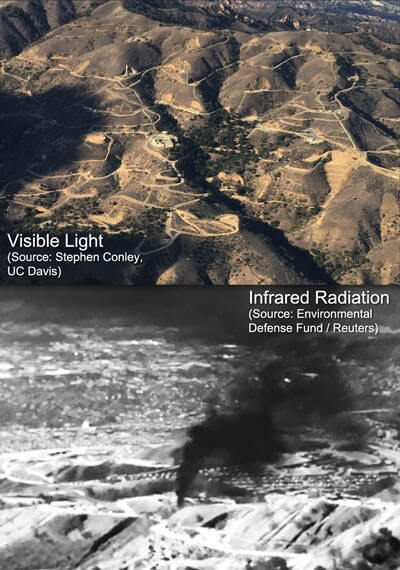 In visible light it is just another beautiful Southern California day in Aliso Canyon. But when viewed in infrared the opaque plume of leaking methane blocks the view. This is a beautiful illustration of why methane is a powerful greenhouse gas.

But I have to admit that my first thought when I saw infrared images of the methane plume was, “cool!”

There is some cool physics at work in the pictures you’ve seen of Aliso Canyon.

Pictures of the Aliso Canyon site taken in visible light show just what you’d expect – nothing! Methane is a colorless, odorless gas. Look out across the site and everything appears perfectly normal, despite the fact that 1,200 tons of gas a day is pouring from the leak. (Look around, just don’t breathe while you are doing it…)

On the other hand, when you take a picture of the site looking at infrared radiation, the view is very different. Now instead of beautiful clear skies off into the distance, you see what looks like thick black smoke pouring from the hole. That is because methane, like carbon dioxide, absorbs infrared radiation.

If you pay attention to the news you hear lots of he-said, she-said political coverage of global warming and climate change. But if you actually want to know something about what’s going on, comparing those two pictures is a beautiful illustration of the physics behind global warming.

Visible sunlight gets in, but infared radiation has trouble getting out.

Want to know more about this stuff than 90% of the “experts” on cable news?

A lot of people have “opinions” about climate change, but I’ll let you in on a secret. The climate doesn’t care about your opinion. It is going to do what it is going to do. 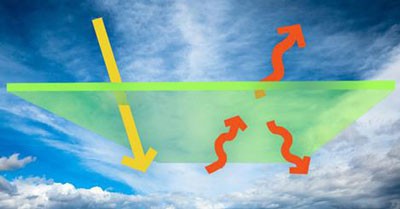 If you would like to really know something about the science behind global warming, check out the Coursera/University of Chicago massive open online course, “Global Warming I: The Science and Modeling of Climate Change.“

The science behind climate change is not that hard to wrap your head around, even if you aren’t a scientist. But listening to 30 second sound bites from talking heads on cable news isn’t going to get you there.

If you would like to take that step from having an opinion to having some knowledge and understanding about global warming and climate change, Coursera and The University of Chicago are offering a Massive Open Online Course, Global Warming I: The Science and Modeling of Climate Change. No science background is needed. Just bring your brain.

The course runs from January 25 through April 24, with enrollment through February 7. If you miss that one, the next session begins February 22. You can sign up and take the course for free, or you can sign up and receive a course certificate for $49.

I don’t have anything to do with offering the course. To be honest, the list of topics looks interesting enough that I might tune in for a lecture or two myself!

Methane Ahoy! ^ The Fun Physics of Aliso Canyon  © Dr. Jeff Hester
Content may not be copied to other sites. All Rights Reserved.