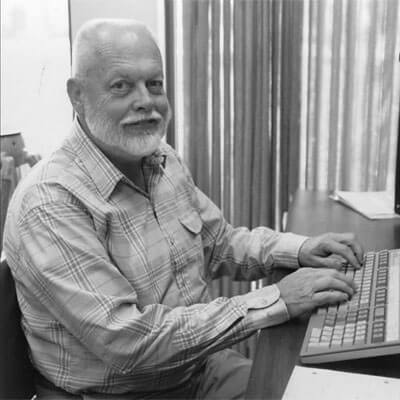 Jim Westphal had an uncommon mind

Written by Dr. Jeff Hester. Modified on August 9, 2016. Posted in For Your Consideration

From roughneck to Principle Investigator of Hubble’s Wide Field/Planetary Camera, Jim Westphal showed just how far competence, curiosity, and a flawless bullshit filter can take you.

The scene is the Huntsville, Alabama, airport, circa 1978. Two astronomers are talking, waiting for their plane. They were at a meeting of the recently formed Space Telescope Science Working Group, hashing out details of what will one day be called Hubble. As conversation goes from topic to topic, they wonder what you could do if you pointed an orbiting 2.4-meter telescope down instead of up.

Both are future winners of MacArthur Foundation “genius grants.” One is Jim Gunn, a brilliant cosmologist known for his contributions to our understanding of the early universe, and for his penchant for rebuilding instruments during the day while observing at night.

Jim Westphal was not your typical Caltech professor.

The other man is the recently named principal investigator of the space telescope’s premier instrument, the Wide Field/Planetary Camera (WF/PC). Widely regarded a genius at instrumentation, Jim Westphal was among the first to put a bolometer on a telescope to look at the infrared sky. More recently, he put a new kind of detector, a CCD, into a vacuum flask made from a spaghetti pot and put it at prime focus on the 200-inch Hale Telescope on Palomar Mountain. 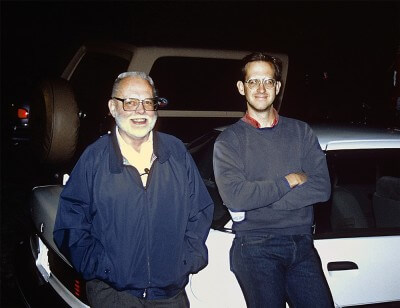 Jim Westphal and his son, Andrew, now a physicist at the University of California, Berkeley, wait for the launch of the Hubble Space Telescope with STS-31.

A full professor at the California Institute of Technology, Westphal seems an obvious choice to hold the future of astronomy in his hands. Obvious, that is, were it not for the fact that by formal training he is a petroleum geophysicist with only a bachelor’s in physics from the University of Tulsa. With his flattop haircut, beard, and flannel shirt, he might look more at home in an oil field, and the skillful ways he turns the air blue would make any roughneck proud.

The two Jims go to work on the back of a napkin. They calculate a down-looking telescope’s resolution, consider data rates, decide how best to use existing imaging technology, estimate the rate of ground coverage, and on down the line. The questions aren’t hard, but they are undeniably fun.

“Westphal, you’re too damned smart for your own good!”

Fast-forward several weeks. Westphal is in Palo Alto, California, when a high-ranking Lockheed executive invites him to lunch. Sitting in the executive dining room, Westphal’s host suddenly becomes serious. “Westphal, you are too smart for your own damned good! And watch what you say when you are sitting in airports!”

It seems the earlier conversation was overheard and was creating a stir among people worried about security leaks. It troubled them that a couple of civilians could deduce the existence of the Keyhole KH-11 spy satellite and correctly describe its capabilities, all during a few minutes of casual conversation.

I met Westphal some years later when he hired me to work with the WF/PC team. Jim was a storyteller, and the time he got the spies worried was a story he loved to retell. It said a lot about who he was. 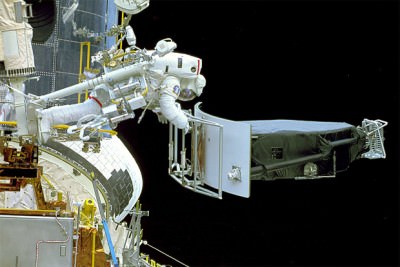 A man who could smell bullshit a mile away.

Jim reveled in the very idea of physics. You can’t hide physics, and you certainly can’t hide from it. In a debate between physics and politics, physics wins. Every single time. I think it confused him that anyone could ever forget such an obvious and fundamental fact. But he knew it when they did! The man could smell manure a mile away.

Whether sitting at a telescope or lowering a camera into Old Faithful (yes, really), Westphal took an almost childlike joy in the world. His highest praise was to call something “really neat.” He heralded good news by exclaiming, “Science and engineering triumphing over ignorance and superstition!” That enthusiasm was contagious.

I recall a night in Hawaii when he led the entire WF/PC science team out onto recently cooled lava — “Look at the red glow coming from the crack under your feet!” — to watch molten rock pour into the ocean. He knew it was against the rules, but since the rangers left at sundown, he also knew that no one would stop us.

Ask Westphal for advice, and nine times out of 10 he would say, “If you aren’t having fun, you aren’t doing it right!” Jim didn’t care much about hierarchy. He did care about competence, and he earned the fierce devotion of the people who worked with and for him. I recall someone asking him how he assembled such a talented group and coaxed them into doing such remarkable things. Managers could learn a lot from his answer: “You find really clever people. You provide them with resources. You protect them from nonsense. And then you get the hell out of their way!”

I owe Jim Westphal my career. More than that, I owe him my understanding of what intellectual integrity looks like.

Jim didn’t live to see Hubble’s 25th anniversary. He died in September 2004. I don’t know that I heard his name mentioned during any of last year’s official Hubble commemorations.

But those of us who were there know that he is a huge part of Hubble’s soul.

Puckish Brilliance ^ Jim Westphal had an uncommon mind  © Dr. Jeff Hester
Content may not be copied to other sites. All Rights Reserved.