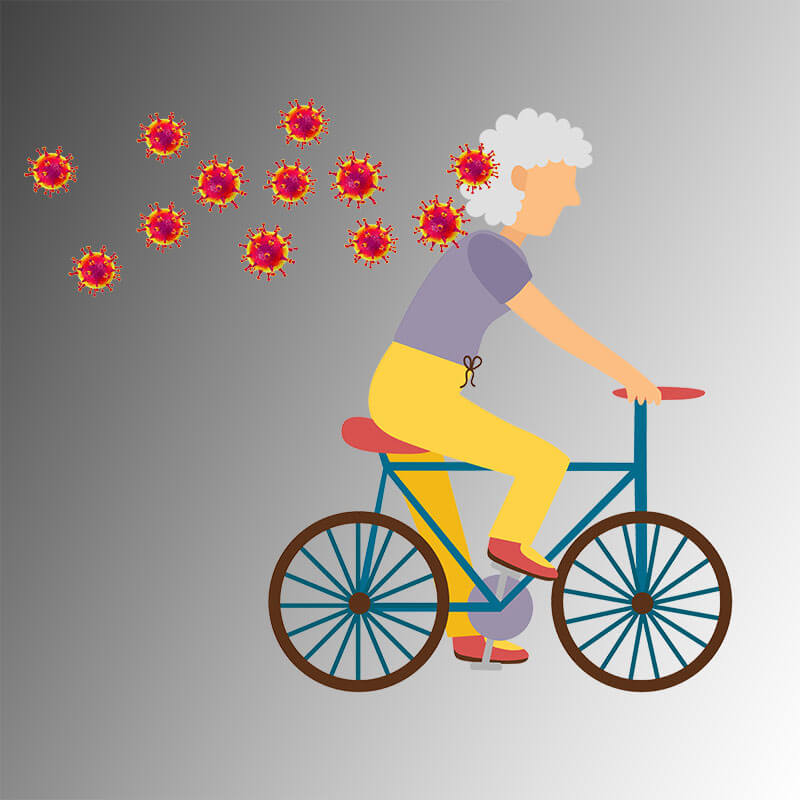 Written by Dr. Jeff Hester. Modified on May 1, 2020. Posted in Thoughts

My wife’s professional day starts at 7:00 AM, so she gets up around 6:00 and heads out the door for a couple of mile walk. Despite the fact that it’s only May 1, it’s hitting 100 F in the afternoons here, so early morning is the time for such things. That’s also before our 10 year old daughter gets up, so Vicki gets a rare half an hour of relative solitude. She is as thankful for that as for the exercise itself.

I take my walk when she gets back, usually heading out the door around 7:00. This is a relatively new routine. We I let myself go for a couple of weeks during the COVID lockdown I rediscovered that exercise is important for sleep, and both are important for mental well being. And let’s face it, if you are following what is going on, mental well being doesn’t necessarily look after itself.

The lady on her bicycle takes aim for her attack.

I take my walk down a pleasant road through the desert, and every morning I see the same woman on her bicycle, perhaps two or three times as she goes up and down the same stretch.  She is probably about my age, and is always done up in proper biking clothes, looking like she is ready for the Tour d’France. This is bluster on her part. She certainly does not ride like she cycles seriously.

The first time our paths crossed, the expression was all but literal. She was riding toward me on the shoulder, and it would have been easy for her to cross the street to give us plenty of space.  Six feet of separation is not the right answer when riding a bicycle; air flow matters.  But instead she barreled on. Had I not jumped off the road at the last minute she was on track to blast past me about as closely as she could. She seemed intent on me feeling her wind in my face. That impression grew stronger when she called out, “What’s the matter, are you afraid of me?”

That first morning pretty much set the now predictable course of our daily interactions. I see her coming a few hundred feet up, and cross to the other side of the street. I smile and wave, and she asks, “Are you scared of me?”  To be fair, sometimes she mixes it up. “I won’t run you over!”  It seems kind of pointless to engage, so I just smile, laugh, and perhaps say something like, “Just being careful.”

“Yes, I’m afraid of you because you are the problem!”

I’d bet a six pack of good beer that she voted for Trump, and another six pack that she will again.

So that’s what I finally did this morning!  I finally told her just what I thought of her not so passive aggression!

Well, OK.  That’s what I did in my head.  What I did with my mouth was say, “These days I’m afraid of everybody.” I was trying to convey, “It’s not just you; I’m not in a hurry to share respiration with random people right now.”  But that’s not right, because it is her.

I’m not really the “embrace fear” type, and most people don’t scare me. I stop and chat with different people most mornings, but those people are responsible and respectful. They are content to be social from a good 15 or 20 feet.  Someone, I forget who, noted that “social distancing” is a lousy term. What we need is physical distancing.  Failing to be social, on the other hand, deprives us of what we need most.

But the lady on the bike terrifies me. What she represents terrifies me. The number of new cases of COVID-19 in the U.S. isn’t falling, and there are many places where the infection and death rates are climbing rapidly. As we better understand how COVID-19 can kill, the recognized fatality rate is also climbing. Deaths in New York City during the worst of their outbreak soared to six times the normal rate.

Some of those deaths were due to people who failed to receive medical care, or when the ambulance didn’t get there on time. Others were directly caused by COVID-19, although without routine testing we’ll never know for certain. We are discovering that COVID-19 kills in lots of ways that do not involve classical symptoms. That includes, for example, relatively young people who were asymptomatic experiencing sudden massive strokes because COVID-19 had attacked cells with ACE-2 receptors in the linings of their blood vessels. And let’s face it. When bodies are piling up in the backs of refrigerated trucks, careful autopsies are few and far between.

Russian Roulette with a Twelve-Shooter

As of May 1, there are just over a million known cases in the U.S., with a death count of over 63,000.  Since deaths lag cases by a week, and 2,000 people are known to be dying daily from COVID-19 with no sign of a downturn, that means today’s million known cases will result in something approaching 80,000 deaths.

In other words, if you show strong enough symptoms to be counted (and are around 60-ish), there is a 8% chance you will die of the disease. And anyone who claims that things are going to be better by such and such a date is selling snake oil. We don’t know what will happen next, but we do know the answer depends on how people behave. With the number of politicians out there actively encouraging bad behavior, that’s going to get worse before it gets better.

That brings me back to my neighbor on a bicycle. Maybe tomorrow I’ll stop and try to explain to her why I cross the street and why it matters. Or not. Odds are it won’t do any good, and I enjoy my walks. I choose not to let her ruin that.

Typhoid Mary on Two Wheels ^ Spreading COVID one lap at a time  © Dr. Jeff Hester
Content may not be copied to other sites. All Rights Reserved.