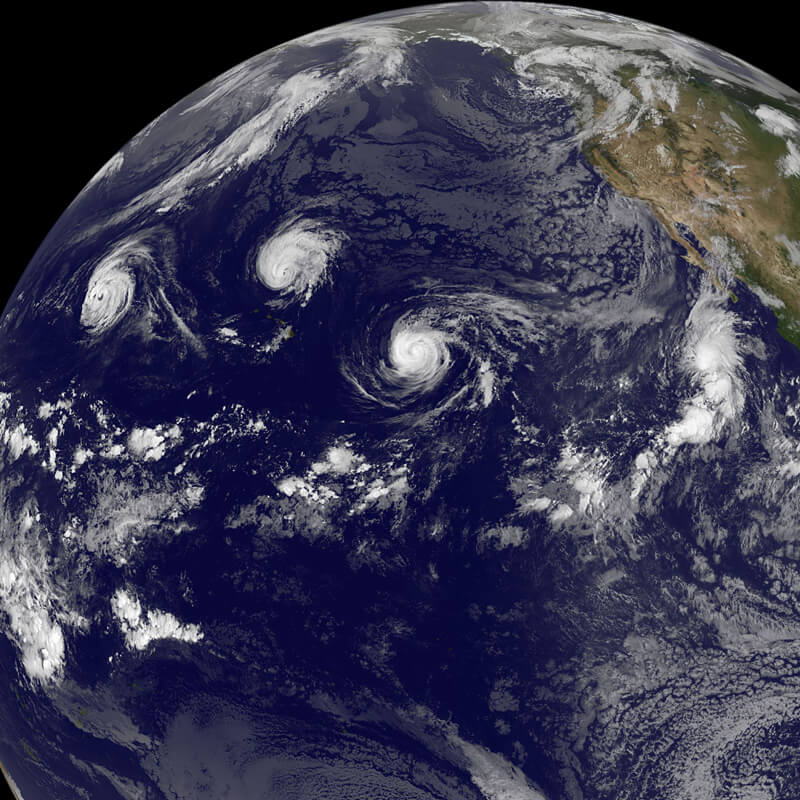 Written by Dr. Jeff Hester. Modified on November 25, 2015. Posted in For Your Consideration

There are a record breaking three Category 4 hurricanes and a new tropical depression in this August 30, 2015 image of the Pacific Ocean taken with NASA’s GOES-15 satellite. We depend on our ability to observe Earth from space. So why is Congress gutting the program?

In the 1990s, NASA undertook an initiative called Mission to Planet Earth. The program would take the remote sensing techniques used to explore other planets and turn them on our home world. The plan virtually screamed “practical benefits.”

By any measure, NASA’s Earth science program has been an extraordinary success. It has revolutionized weather forecasts, agricultural predictions, resource management, and climate science. Return on investment is off the charts. But such a program has to be maintained. Quoting a 2007 report from the National Academy of Sciences, “The current capability to observe Earth from space is in jeopardy.” Without resources, that capability will be lost.

If we depend so much on NASA’s Earth Observatory, why is Congress slashing its budget?

So why is it that as of this writing, Congress is poised to slash as much as three-quarters of a billion dollars from the program and cripple a vital global perspective that we have come to depend on? The answer is disturbingly simple. Many in Congress, along with their well-heeled backers, would prefer that we not see what NASA’s data are showing us.

The crux of the issue is, of course, global warming. But one thing that you won’t often hear amid the hype on cable news is a calm, rational explanation of what global warming is and how it works. 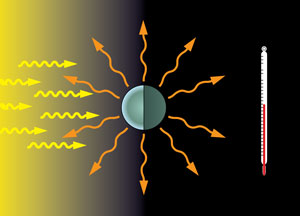 The temperature of a terrestrial planet is determined by a balance between sunlight in and infrared radiated into space. Read a discussion of how it works from my textbook, 21st Century Astronomy.

The basic physics of global warming is easy enough for Astronomy 101.

Imagine a rock adrift in space. Energy arrives as visible sunlight, trying to heat things up. Energy leaves as thermal infrared radiation, trying to cool things down. At some temperature, the two will balance. Voilà! Now imagine the rock is wrapped in a blanket that lets sunlight in but makes it harder for infrared to get out. More energy is coming in than is leaving, so things heat up. Eventually, balance is restored, but at a new higher temperature.

The atmospheres of Venus, Earth, and Mars are just such blankets. Gases like carbon dioxide, water vapor, and methane are transparent to visible sunlight but block escaping infrared. The thin atmosphere of Mars only raises the temperature by about 9° F (5° C). The massive atmosphere of Venus heats the surface to a whopping 860° F (460° C), well above the melting point of lead!

“That’s right,” responds the professor, happy that somebody is paying attention.

“So,” our student continues, “if there were more carbon dioxide, Earth would be warmer, right?”

“Funny you should ask …”

If more energy comes in than leaves, Earth will get warmer.

Since 1750, humans have released over 300 billion metric tons of carbon into the atmosphere. There is 44 percent more carbon dioxide in our atmosphere today than there was before the Industrial Revolution. Half of that increase has come since 1980. 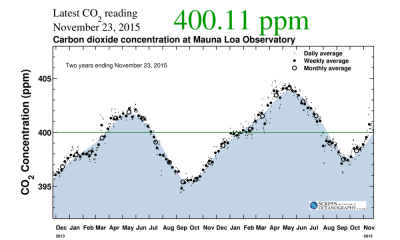 Before the Industrial Revolution, atmospheric CO2 levels were 280 parts per million. Since then, levels have gone up by 40%, and may now be permanently above 400ppm. (Figure from the Scripps Institution of Oceanography.)

There is over 30 percent more atmospheric carbon dioxide than at any time in the last 800,000 years. And just as our student realized, when you crank up the thermostat, things will start to heat up.

There are about a half dozen ways to measure Earth’s thermal imbalance, and they all show that the planet is warming. Imagine Earth’s surface covered by 1-kilowatt heaters, one every 100 feet (30 meters) or so. The heaters run 24/7, year after year, decade after decade: That is global warming.

Cable news will tell you there is scientific controversy about this, but they misrepresent the facts. When 97 percent of the research in a field agrees, that’s about as close to consensus as you are ever going to get, especially when there is a huge payday for disagreeing. Drexel University researchers found that between 2003 and 2010, $558 million from untraceable sources was funneled to climate change deniers. 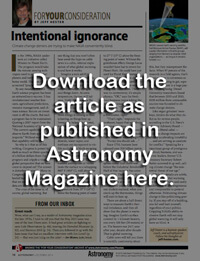 This article on NASA vs the climate change deniers, as it appears in Astronomy Magazine.

Like organ grinders’ monkeys, deniers do what they do. But as for serious people, according to the Center for Naval Analyses’s Military Advisory Board — hardly a liberal cabal — “Climate change impacts are already accelerating instability … and are serving as catalysts for conflict.” Speaking for a bipartisan group of prestigious political, business, and academic leaders, former U.S. Treasury Secretary Robert Rubin summed it up well, calling climate change “the existential threat of our age.”

While the details are subtle, the basics of global warming are incontrovertible and easily understood. It is disingenuous and irresponsible to pretend otherwise. Politicizing climate change is like politicizing gravity. If you step off of a building, you fall and hurt yourself, regardless of your politics. Crippling NASA’s ability to observe Earth will not stop global warming; it will only leave us blind.

Intentional Ignorance ^ Climate change deniers are trying to make NASA conveniently blind  © Dr. Jeff Hester
Content may not be copied to other sites. All Rights Reserved.