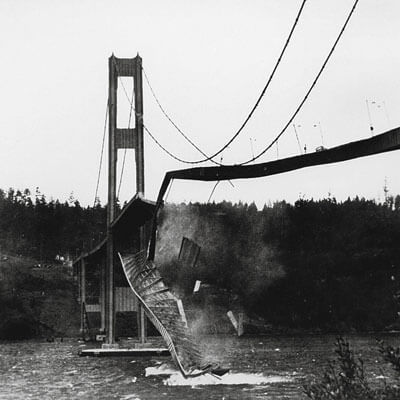 Returning engineering to its roots

Genetic algorithms are revolutionizing our world by reconnecting engineering with its four-billion-year-old roots.

Republished from my monthly Astronomy Magazine column, For Your Consideration.

I recall the first time that I saw the famous movie of the windy November morning in 1940 when the Tacoma Narrows Bridge, connecting Tacoma and the Kitsap Peninsula across Puget Sound in Washington, tore itself to pieces. There she was, “Galloping Gertie” as the bridge was known, wildly bucking and twisting in a 40 mph (60 km/h) wind. Then, suddenly, in a matter of only a few seconds, the third-longest suspension bridge ever built at the time was no more! To this day, the Tacoma Narrows Bridge remains a textbook example of engineering gone wrong. Structures are subject to vibrations, and if you aren’t careful, those vibrations can spell big trouble.

The spectacular collapse of “Galloping Gertie” in 1940 remains a textbook example of engineering design gone wrong.

Fighting vibrations with a different approach to design

Enter Professor Andy Keane. The year is 1994, and Keane and his colleagues at Southampton University in the UK are working to design a much smaller bridge — a truss — that is as vibration-free as possible. They aren’t worried about the extreme oscillations that destroyed Gertie, but they do care about the slight vibrations that would cripple a delicate instrument like an astronomical satellite. They start with a traditional design, but that’s where tradition ends. Instead of using their knowledge and insight to improve the design in clever ways, they metaphorically throw intelligence out the window. They hand the job over to a computer and then kick back and wait to see what happens.

The computer itself is kept intentionally dumb. It doesn’t know anything about engineering design principles. It only can do two things. First, it can make new virtual trusses by combining and randomly changing the properties of existing trusses. Second, it can compare trusses and tell better from worse. Armed with no other tricks up its sleeve, the computer marches along, blindly turning the crank:

Step 1: Make a new generation of trusses by shuffling and making random changes in the previous generation.

Step 2: Evaluate the new trusses, and toss the ones that don’t work so well.

Ten generations and over 1,000 virtual trusses later, the computer’s best effort is lopsided and twisted and irregular. It looks more grown than designed. Nobody understands it or has the faintest clue how it works. But it does work. It works very well. The vibrations have been improved by more than 20,000 percent! 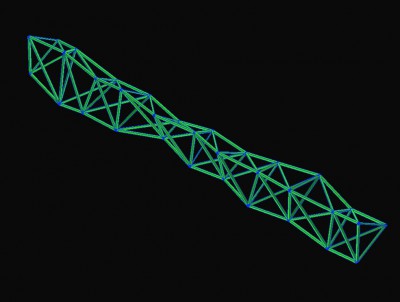 This truss, designed by a genetic algorithm, may not look like much, but it performs wildly better than a traditional truss designed by humans using standard engineering principles. (Photo courtesy Andy Keane.)

When the right conditions are met, evolution isn’t a theory; it is applied logic.

Keane was not the first to take this approach to design, and he certainly wasn’t the last. Two decades later, such unguided, blind algorithms are revolutionizing our approach to the shapes of airplane wings and turbine blades, new molecules for industrial and pharmaceutical uses, pattern recognition, communications networks, investment strategies, cancer treatments, and hundreds of other applications.

At their core, all of these applications have two things in common: (1) the better an item performs, the more likely its properties will be retained; and (2) when surviving properties are passed on from one generation to the next, variations occur. As long as these two conditions are met, properties will evolve from generation to generation as items become better and better suited to their task.

By the way, life satisfies these two conditions. When evolutionary biologists talk about the first condition, they call it “selection.” When they talk about the second condition, they call it “heredity with variation.” And like any other system that satisfies these conditions, life evolves. Logically, life can’t help but evolve! In one sense, engineers who employ genetic algorithms to evolve technologies are doing something new. But in a deeper sense, they are returning engineering to its roots, tapping the power of the mindless algorithm that has been shaping life for almost 4 billion years.

If you want to understand the algorithm of evolution, talk to a cutting-edge design engineer.

The public discussion of biological evolution is undeniably muddled. In part that is because people tend to approach it from the wrong direction. Darwin’s voyage on the Beagle deserves to be the stuff of legend, but if you want to understand evolution, forget about finch beaks or fossils. Instead, talk to a working engineer who is using genetic algorithms to evolve a truss.

Once you’ve wrapped your head around how and why a truss gets so good so quickly, you have the understanding you need to approach evolution as scientists do. You can use that understanding of evolution to make predictions about the world and then see whether those predictions hold true. When you do that, you discover that the predictions of evolution are in remarkable accord with all that we see. From the fossil record to the common chemistry of life, to the shared structure of different species — and now to pharmaceuticals, jet engines, and bridges — we live in a world crafted by evolution’s unguided hand. 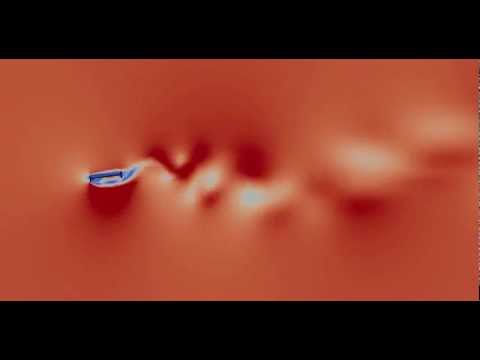 The Tacoma Narrows Bridge collapsed because it acted like an unstable airplane wing. If you are interested in the wind-driven resonance (called aeroelastic flutter) that caused the collapse, watch this cool video of a computer simulation from the Natural Hazard Modeling Lab at The University of Notre Dame.

It’s Genetic ^ Returning engineering to its roots  © Dr. Jeff Hester
Content may not be copied to other sites. All Rights Reserved.