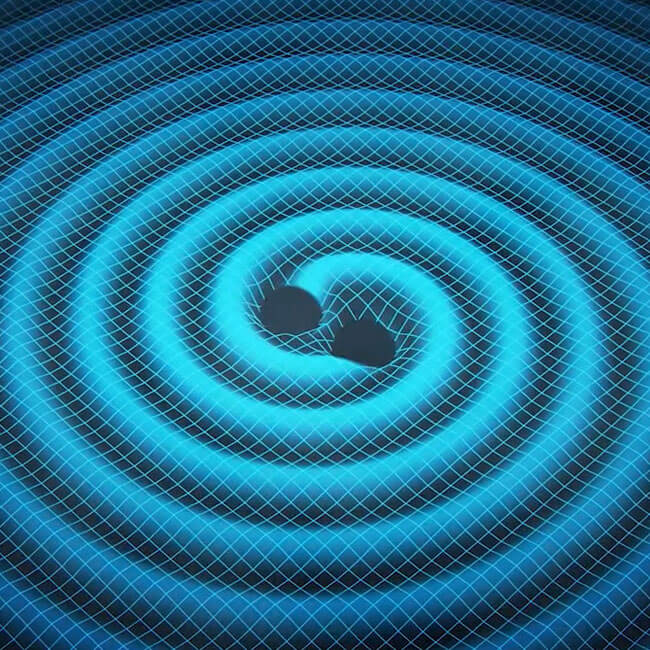 The history that LIGO forgot

Written by Dr. Jeff Hester. Modified on March 9, 2017. Posted in For Your Consideration

Gilding the lily makes everybody look bad. When the Laser Interferometer Gravitational-Wave Observatory detected ripples in the fabric of space-time from a pair of merging black holes, it was a technological and scientific accomplishment without peer! But LIGO did not “discover” gravity waves.

T wo black holes spiraled together in a cataclysmic event that converted three times the mass of the Sun into pure energy. That energy traveled outward through space as ripples in the very fabric of the universe. More than a billion years later, those gravitational waves swept past Earth and were detected by the most extraordinary measuring device humankind had ever built.

By directly detecting gravitational waves, LIGO has given us a whole new way of observing the universe. That extraordinary technical accomplishment and the discoveries it promises are awe-inspiring. We had been blind, but now we can see! 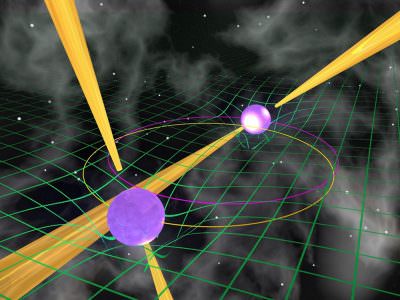 Russell Hulse and Joseph Taylor confirmed that the orbit of a binary pulsar was decaying just as predicted by Einstein’s theory of relativity, making them the first to discover direct evidence of gravitational waves. (MPIfR/M. Kramer)

Of course, astrophysicists had already known that gravitational waves exist for four decades before the LIGO announcement. LIGO scientists recount that history in the opening paragraphs of their own 2016 paper in Physical Review Letters: “The discovery of the binary pulsar system PSR B1913+16 by Hulse and Taylor and subsequent observations of its energy loss by Taylor and Weisberg demonstrated the existence of gravitational waves.”

In 1974, the binary pulsar was the test of Einstein’s theory that everyone had been waiting for. Had the orbit of the binary pulsar not decayed as predicted, the headlines would have read, “Einstein wrong! Gravitational waves don’t exist!” And LIGO would never have been built. Hulse and Taylor were awarded the 1993 Nobel Prize in Physics for their work. Isaac Newton famously said, “If I have seen further than others it is by standing on the shoulders of giants.” For LIGO, those giants included Hulse, Taylor, and Weisberg.

It takes chutzpah to ignore three Nobel Prizes in the same press conference!

During the gravitational waves press conference, Rainer Weiss, a LIGO co-founder, seemed about to tell that story. He set it up beautifully, talking about the rapid orbital decays of collapsed objects like black holes and neutron stars. The next words out of his mouth should have been “Hulse and Taylor.” Instead it was as if a chapter had been eliminated from a book. In the narrative, suddenly it was 2015 and LIGO was confirming Einstein’s predictions for the first time.

Another surprising omission came later. When Kip Thorne, black hole expert and fellow LIGO co-founder, took his turn at the mic, he enthused, “All of our previous windows through which astronomers have looked are electromagnetic!” In the process he ignored not one but two Nobel Prizes. The 2002 and 2015 prizes both recognized neutrino astronomy, which not only confirmed our fundamental understanding of the workings of stars and core-collapse supernova explosions, but also provided the first hard evidence of a failure of the Standard Model of particle physics — neutrinos were supposed to be massless.

Why would LIGO choose to gild the lily?

Maybe I’m just being a curmudgeon. Events like the LIGO press conference are about sharing the excitement of a moment. Believe me, I get it. I was among those who addressed the American Astronomical Society in January 1994, celebrating the successful repair of the Hubble Space Telescope. Sometimes you have to shout “we’re number one!” and spike the ball in the end zone. 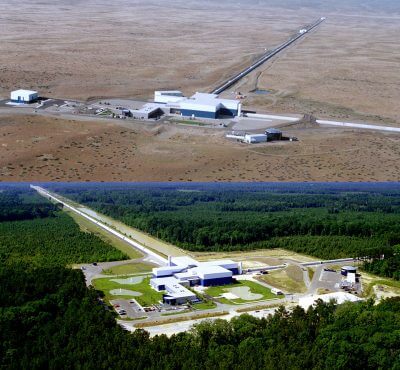 Certainly stretching the truth a bit at a press conference is nothing new. A few years after Hubble was repaired I attended a colloquium about some lovely ground-based observations of elliptical galaxies. The speaker closed with a tongue-in-cheek remark. “Just remember, when Hubble discovers this, you saw it here first!” The room roared with laughter!

Then there is realpolitik. Back in the day, then Hubble project scientist Ed Weiler had a favorite saying: “Congress doesn’t read The Astrophysical Journal. Congress reads The New York Times.” He was right.

As the most expensive project ever supported by the National Science Foundation, LIGO faces that same reality. Press conferences are important. They are scripted and rehearsed, with PR types directing the show. That’s fine. But when crucial things like the binary pulsar and neutrino astronomy aren’t mentioned, it is usually because someone worried they would “detract from the story.” That’s not OK.

Credibility for dollars is always a bad trade.

Maybe an example best illustrates my concerns. When then presidential candidate Rick Perry ridiculed climate science, he would typically sidestep the science itself and instead attack the credibility of scientists. “There are a substantial number of scientists who have manipulated data so that they will have dollars rolling into their projects,” he claimed in a speech to New Hampshire voters in 2011.

Those attacks were unfounded, but a lot of people were (and are) predisposed to believe them anyway. Perry was tapping into and reinforcing a common perception that scientists routinely gild the lily in their all-consuming quest for publicity and funding. He marginalized solid and important research by painting scientists as hucksters.

Over the years I’ve heard that sentiment more times than I can count. “Hey Jeff, what’s this new thing? What’s the spin? How much of it is real?” Is the LIGO press conference to blame for that perception? Of course not! But, if only in small ways, LIGO did play that game.

The detection of gravitational waves from merging black holes was a truly profound and triumphant event. A few spoken sentences placing LIGO in its proper historical and scientific context would only have added to the celebration of such an extraordinary accomplishment.

Pulsars and Neutrinos ^ The history that LIGO forgot  © Dr. Jeff Hester
Content may not be copied to other sites. All Rights Reserved.