The Man Behind the Pillars

Written by Dr. Jeff Hester. Modified on November 7, 2015. Posted in For Your Consideration

Astronomy Magazine asked me to write a piece about what the iconic Hubble Space Telescope image of the Eagle Nebula has meant to me personally. The short answer: It’s been a wild ride!

When David Eicher asked me to write a short piece about what the Hubble WFPC2 image of the Eagle Nebula has meant to me personally, I chuckled. Not everyone winds up seeing his work on a US Postage stamp or in Time Magazine’s collection of the 100 most influential photographs in history. It’s cool to see the pillars on the big screen in a scifi blockbuster or hanging on the window of Sheldon and Leonard’s apartment on The Big Bang Theory. It’s fun to hear the phone ring and have a friend say, “Hey, I just saw you on TV again!” It’s been quite a ride, made especially rewarding because I was part of the team that built the camera. 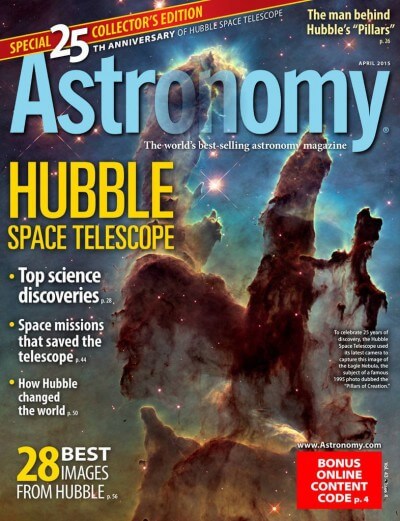 The Eagle Nebula image symbolized an end to what had been a very difficult period for NASA. That is what it was designed to do. The press conference was scheduled to coincide with a feature article in Time Magazine heralding Hubble’s phoenix-like rise from early disaster. How better to illustrate that story than with a stunning image unlike anything the public had ever seen? But no one imagined a reaction that would turn the image into a cultural icon.

For as long as there have been humans we have looked at the sky in awe and wondered about our connection with the heavens. Now for the first time in history we can tell that story, beginning with the Big Bang and ending with us sitting here talking about it. Knowledge of our place in the Universe is no longer a matter of speculation or mythology. It is hard science. For many, The Pillars of Creation became the recognized face of that human triumph.

I have spent countless hours discussing the image not only with fellow scientists, but with artists, musicians, writers and in fact people from all backgrounds. They would speak of beauty and passion and inspiration. The more I listened the more familiar their reactions sounded to my own. We were all expressing our experience of the human drive to find patterns and meaning in the midst of the complexity of the world.

David asked me, “What has the image meant to you, personally?” There is no doubt that it reshaped my career as a scientist. But more than that it changed not only the way I think about science and art, but also my understanding of what it is to be human.

The Man Behind the Pillars  © Dr. Jeff Hester
Content may not be copied to other sites. All Rights Reserved.