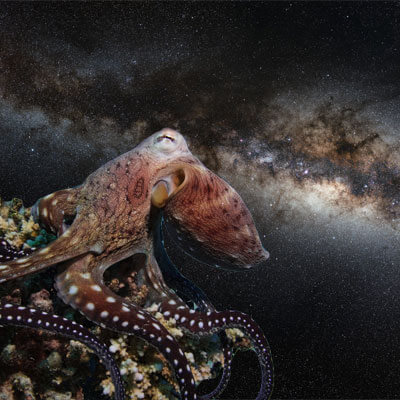 The Octopus and ET

Is intelligence an evolutionary forced move?

Evolution has no goal, but there are things that it stumbles onto over and over again. If the other-worldly octopus is any indication, intelligence could be common wherever complex life appears.

It’s been 55 years since Frank Drake introduced his famous and eponymous equation, a product of rates and probabilities used to estimate the number of technological civilizations in our galaxy. Drake could only guess at most of the terms’ values when he conceived of the equation, but we’ve learned a lot since then. We know the rate at which Sun-like stars form. We know that planetary systems surround almost every star, and that potentially habitable Earth-like planets are common.

When pondering extraterrestrial intelligence, sometimes Earth is our only guide.

For some terms in the Drake Equation, Earth is our only guide. Terrestrial life arose quickly, but it took almost half the current age of our star before diverse complexity exploded on the scene. In contrast, once hominids appeared it only took a thousandth the age of the planet to go from stone tools to walking on the Moon. How long advanced technological civilization will survive remains to be seen.

One term in the Drake Equation concerns intelligence. Given the opportunity, is intelligence likely to evolve, or is the step from life to mind an all-but-insurmountable hurdle?

In my July column, I described how engineers are using genetic algorithms to evolve new technologies. In that instance, as when breeding dogs, evolution is guided — it has a direction. But the only thing guiding evolution in nature is survival. Evolution by natural selection isn’t moving toward anything. Rewind the clock and start life on Earth over again and the world would not be the one that we know today. There would be no humans, no us.

The eye is an evolutionary “forced move.”

But would there be intelligence? Let’s come at that question sideways, starting not with brains but with the evolution of eyes. From vertebrates, to insects, to crustaceans, the natural world abounds with eyes. Eyes evolved independently as many as 65 times. The question is, if evolution doesn’t know where it’s going, how does it keep ending up in the same place? 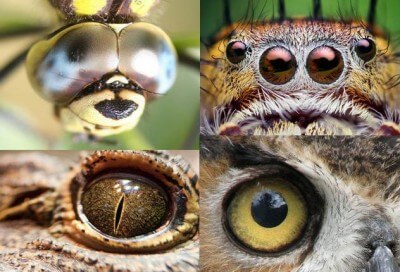 Evolution has invented eyes from scratch as many as 65 times, making the eye an evolutionary “forced move.”

A single mutation isn’t going to give an organism an eye, but it could invent a protein that reacts with light. That is enough to get the ball rolling. In a world of the blind, even a simple light-sensitive patch offers a competitive advantage. And if, by chance, your light-sensitive patch were curved, that would tell you something about where the light is coming from. That newfangled curve might help you zag to safety when others zig to their demise, helping your genes survive into the next generation.

Generation after generation, natural selection favors more and more pronounced curves. From curve, to cup, to pinhole camera, to a protective membrane that becomes a lens, every small step offers a survival advantage and so is selected for.

The eye is an example of what philosopher Daniel Dennett calls an evolutionary “forced move.” The form of the eye is not predetermined. Eyes range from compound eyes to the virtual Schmidt cameras found in some deep-sea fish. But courtesy of geometrical optics and the survival advantages of gathering progressively better information about the world, evolution invents eyes again and again.

Intelligence has also evolved from scratch on Earth more than once.

So, starting with a primitive nervous system, does each small step toward intelligence convey survival advantage? Does this mean evolution of intelligence is also a forced move?

If you have never Googled “octopus video,” you should. Octopuses are curious creatures, by which I mean they possess curiosity. They solve complex problems, have excellent memories and individual personalities, and learn by watching others. They play. They plan. They use tools. They are escape artists and annoy aquarium keepers by taking things apart to see how they work.

Humans and octopuses parted evolutionary company something like 700 million years ago, yet each evolved problem-solving intelligence. The Larger Pacific Striped Octopus has even evolved the beginnings of social intelligence. It mates beak to beak, lives in groups, shares dens, and lays eggs multiple times instead of only once. Given another few million years to evolve, it is hard to say where they might end up! 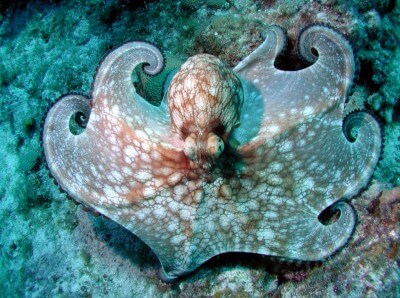 Intelligence has evolved on Earth more than once, suggesting that intelligence might be a “forced move” for evolution. But as this octopus and I regarded each other off the coast of Cozumel, neither of us could begin to fathom what the consciousness of the other must be like.

The octopus is an alien intelligence among us.

Citing the Cambridge Dec­laration on Consciousness, some researchers even suggest that octopuses may be sentient. They may think, feel, and experience. But what would consciousness be like to an animal with two-thirds of its neurons distributed throughout its body and arms that can act independently from the central brain? Cut off an octopus’ arm and the arm keeps doing things, including capturing prey and trying to feed a mouth that is no longer there.

Many times while scuba diving I have settled in to watch an octopus with absolutely no doubt that the octopus was watching me right back. Is it a fluke that, starting from scratch, evolution invented intelligence more than once? Or does each small step toward intelligence offer some advantage, making intelligence, like the eye, an evolutionary forced move? If so, extraterrestrial intelligence may be common wherever complex life appears in the universe.

But as I think about the octopus, I doubt that we can even begin to imagine just how profoundly “other” that intelligence might turn out to be.

The Octopus and ET ^ Is intelligence an evolutionary forced move?  © Dr. Jeff Hester
Content may not be copied to other sites. All Rights Reserved.