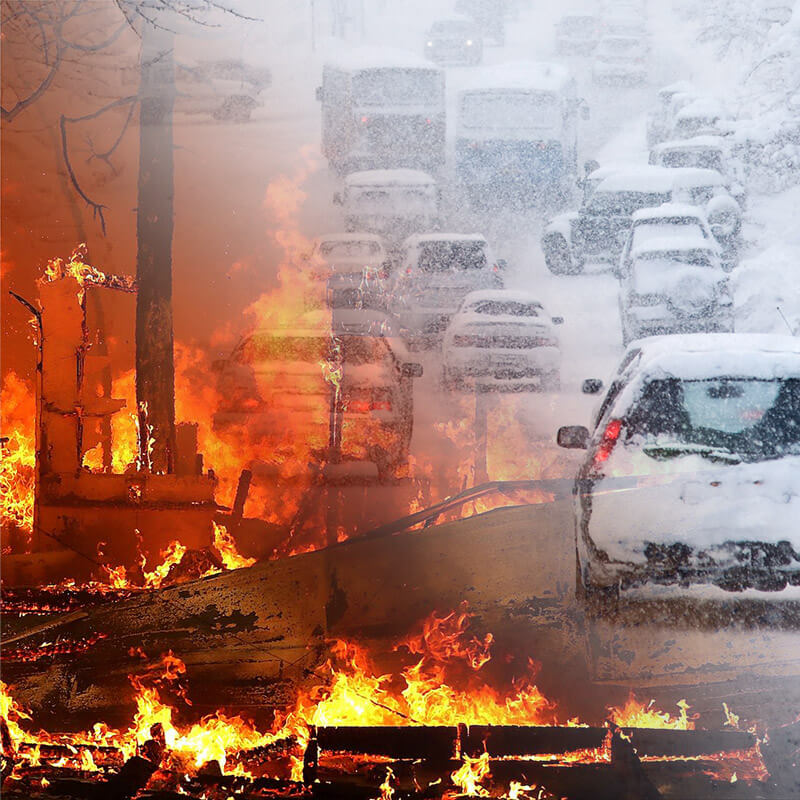 Written by Dr. Jeff Hester. Modified on February 17, 2021. Posted in For Your Consideration

I wrote this piece for Astronomy a bit over a year ago, focusing on the bizarre weather of the previous year. Not to be outdone, 2020 said “hold my beer” and offered up history’s worst fire season in the American West, the busiest Atlantic hurricane season on record, and one of the two hottest years ever seen.  Just to add insult to injury, as I prepare to post this 2121 has stepped up to the plate shattering thousands of low temperature records as the worst winter storm in decades sweeps the South.

Heat flows from the tropics to the poles, and Earth’s rotation stirs the pot.

If Earth were the same temperature everywhere, our lives would be pretty boring. Actually, they would be more than boring; they would be impossible. Thank goodness that isn’t the case. Differences in the directness of sunlight at different latitudes and the high albedo of ice as compared to land and open ocean mean that equatorial regions soak up a lot more heat than polar regions. And that thermal gradient is what keeps things interesting. 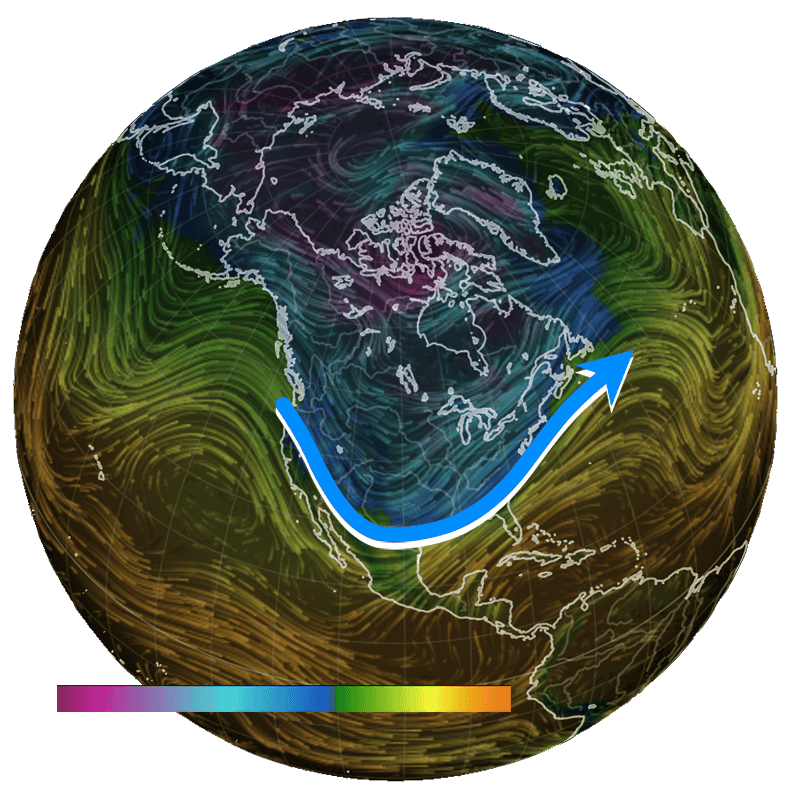 The basics of how temperature differences stir things up are straightforward. Warm air near the equator rises, then at high altitudes spreads out toward the poles. In the meantime at lower altitudes, cooler air moves toward the equator to replace the rising warm air. The opposite happens at the poles. High-altitude air carrying extra thermal energy moves toward the ground, heating things up, while cold ground-level air moves toward lower latitudes. Coriolis effects due to Earth’s rotation break the system into equatorial, midlatitude, and polar convective cells separated by high-altitude jet streams.

Without that global thermal conveyor belt, the poles would be about 45 degrees Fahrenheit (25 degrees Celsius) cooler, and the equator 25 F (15 C) warmer than each is today. This is the engine that drives Earth’s climate and weather.

So, what would happen were the difference between the poles and the equator to lessen for some reason? Needless to say, things would change, but how? Again, the basics aren’t hard to grasp. A fast-spinning top is stable, but as it slows, it wobbles. A hurricane with a very low central pressure has a tight, stable structure. But as the pressure difference between inside and outside the storm weakens, circulation becomes sloppy and unstable. 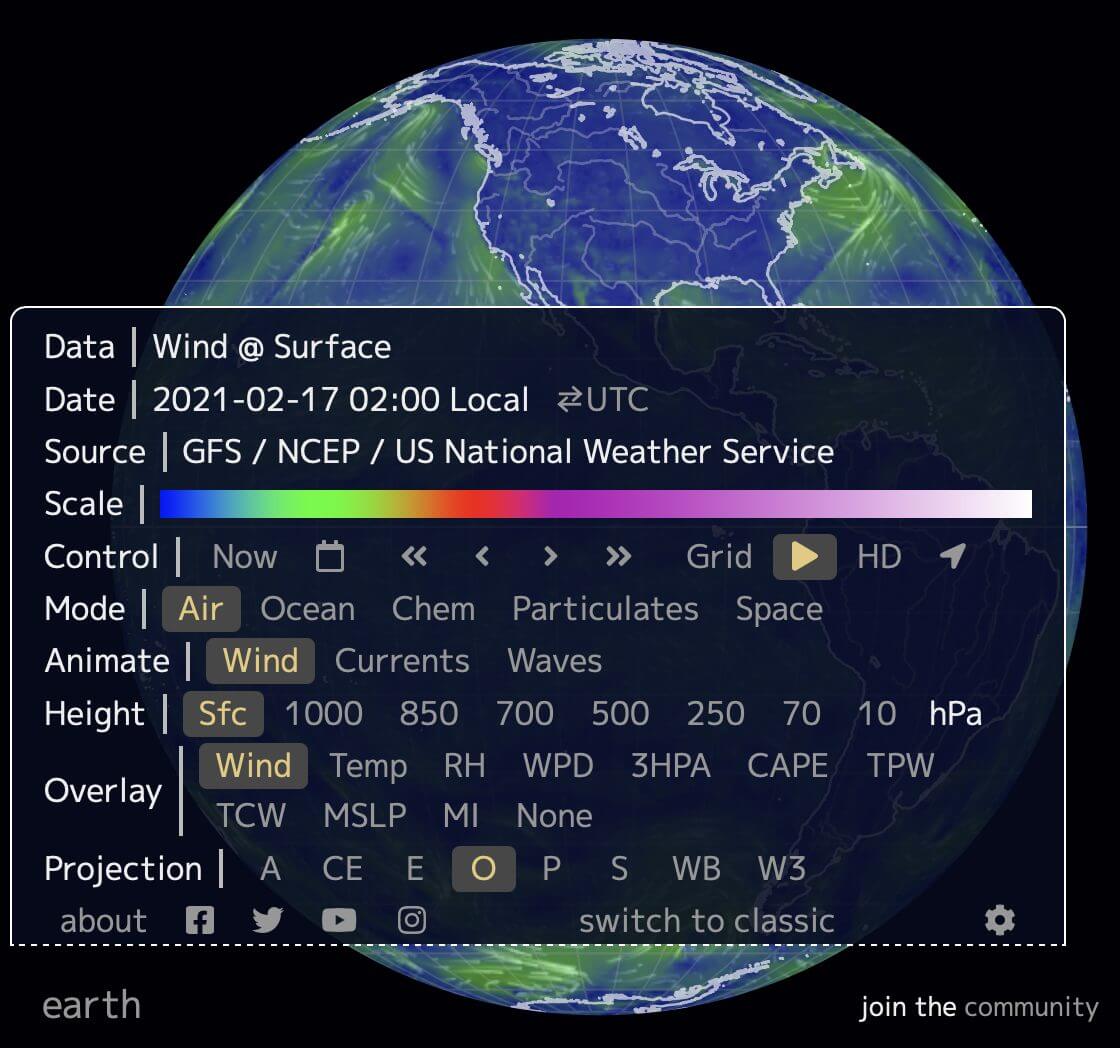 If you wonder what’s up with Earth’s oceans and atmosphere right now, or at some point in the past, check out the cool visualizations at earth.nullschool.net.

The same thing applies to Earth’s atmosphere as a whole. Just like a hurricane coming apart as the central pressure increases, increasing the temperature of the poles relative to the equator could easily destabilize global circulation. Mucking with that balance isn’t tickling Earth’s climate system. It is kicking it squarely in the posterior.

The thing is, that’s exactly what we’re doing. Atmospheric carbon dioxide and other gases allow visible sunlight in but reflect infrared radiation back into space. Unsurprisingly, thickening Earth’s atmospheric blanket heats things up. But that heating isn’t uniform. The poles are much more affected by greenhouse gases than is the equator. Melting sea ice adds insult to thermal injury.

As expected (and predicted), as global warming has reduced the thermal imbalance between poles and the equator, circulation around the poles has gotten a lot more wobbly. In some places, the northern polar jet steam can go way to the south, bringing cold polar air with it. In other places, it can go way to the north, drawing hot tropical air toward the poles. Those big excursions are called Rossby waves.

If it seems like the weather is getting crazier, that’s because it is.

Common, fast-moving Rossby waves carry storm systems from west to east.  But the until recently uncommon, slow-moving Rossby waves I’m talking about are a different beast. These waves get stuck doing what they do in the same spot, sometimes for weeks on end. 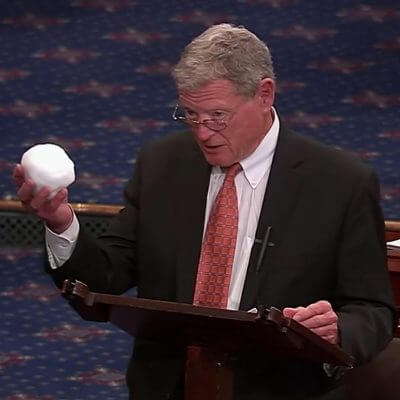 On February 26, 2015, Oklahoma Senator Jim Inhofe threw a snowball on the Senate floor to prove that Climate change is a hoax. I suppose that is the kind of thing that happens when an unscrupulous huckster sells his ignorant soul to Exxon-Mobile.

The things that they do are pretty funky, and can get extreme. For example, the polar jet dipped all the way down into Arizona in late spring. Snow fell in Flagstaff, and in Phoenix temperatures 20 F (10 C) below normal had us wondering if it was time to pull our sweaters back out. At the same time, the stalled jet stream pulled humidity from an overly warm Gulf of Mexico and dropped it on the U.S. Plains, turning Oklahoma into a good approximation of an inland sea and blasting it with tornadoes on a daily basis. The show continued as Alaska “enjoyed” air coming up from the tropics, pushing Anchorage above 90 F (32 C) for the first time ever.

Slow-moving Rossby waves are fun in the northern winter, too. Referred to as the “polar vortex,” the masses of polar air Rossby waves bring southward have been pounding the U.S. Northeast with hellish record-breaking winter storms even as Alaskans experience what for them amounts to shirtsleeve weather.

Welcome to the new normal. Why did Nero fiddle while Rome burned? I’m sure it was spectacular to watch, and at that point what else was he supposed to do? So, is it bend-over-and-kiss-your-keister-goodbye time for us? If not, it’s not far off. But hey! At least the physics of climate change is cool.

Watching Rome Burn & Hell Freeze ^ The fun physics of global cataclysm  © Dr. Jeff Hester
Content may not be copied to other sites. All Rights Reserved.